A migraine is not just a headache. This is something that nonmigraine sufferers do not tend to understand. In this article, we’ll be going over using CBD for Migraines.

In fact, a migraine is much more severe and in some cases even debilitating. It is comparable to a throbbing headache. It normally affects one side of the head rather than the whole head.

In addition, migraines tend to present a wide variety of symptoms to go along with them. Most often, migraine sufferers complain of disturbed vision and nausea. Migraines can last for several hours or for as long as 3 days. In many cases, migraines create in a person the need to lie still for hours. This is because the migraine is so intense, the only thing that helps the victim feel better is lying in a cool, dark, room.

Unsurprisingly, the array of symptoms can cause a massive impact on the lives of those suffering from migraines. It can also impact the lives of people around them, whether at home or at work.

What exactly is CBD oil? 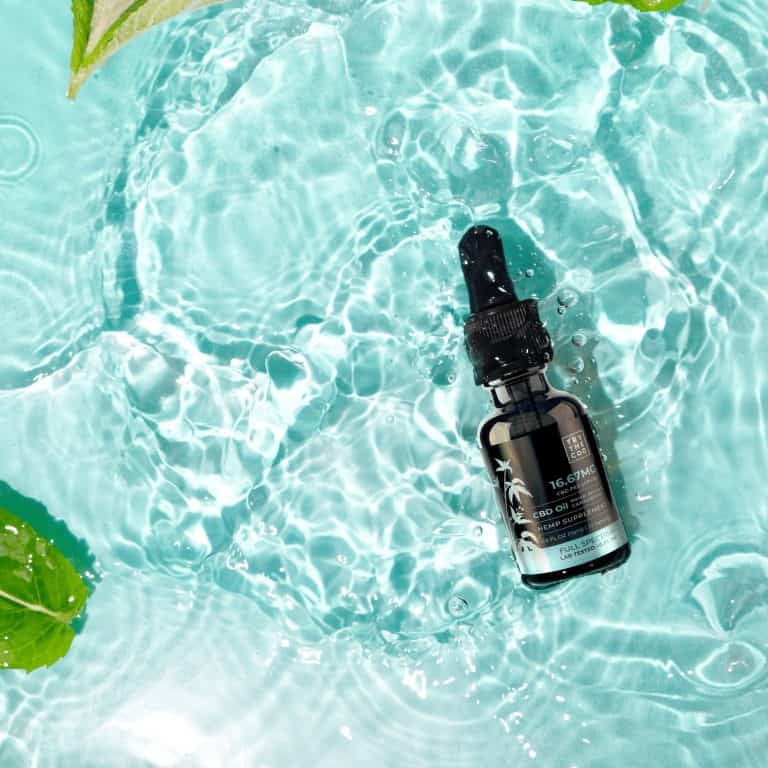 The cannabis plant contains over 100 known cannabinoids. These are chemical compounds found in cannabis that interact with the system of human neuroreceptors.

Tetrahydrocannabinol, or THC as it is commonly referred to, is the most widely known… for now. THC’s nonpsychoactive cousin, Cannabidiol, or CBD, is rapidly making a name for itself. People are beginning to understand it as a powerful player in the cannabis world. It lacks any mood-altering properties and is therefore used in a medicinal context.

CBD oil is a concentrated extract of this amazing compound. It has been making waves as a treatment for countless medical conditions and symptoms. Moreover, it has quickly become nearly as well known as THC in just a few years.

The medicinal cannabis movement began in earnest in 1996, when the state of California made it legal to use it with a doctor’s prescription. There was still a lot of residual taboo surrounding the plant at that time. This was partially due to decades of prohibition and all of the negative propaganda that permeated the collective American psyche.

Slowly, however, this began to ease off. As more and more states enacted legislation that made medical cannabis legal, the way people viewed it began to change.

CBD has helped propel the medical cannabis movement into the mainstream. Doctors are still deciding whether they are behind it, and scientists need to conduct further research. Still, with no consciousness-altering “side effects,” the future looks bright for CBD.

Naysayers have long contended that medical marijuana is an excuse for stoners to legitimize themselves and their culture when all they really want to do is get high. Luckily, CBD has effectively voided that argument. You don’t get high on CBD. This may be a convincing factor for individuals who want to try CBD for Migraines.

What Can CBD Oil Do For Me?

Not long ago, CBD was nearly unknown. It was only a discussion among the most informed medical cannabis activists and health practitioners. Once its value began to come out into the public eye, CBD oil started showing up everywhere.

There remain four states in the union that retain full prohibition legislation on their books. However, it’s becoming increasingly difficult for those states to justify depriving their citizens of this medicine. The trend will likely head in favor of cannabis, not keep it outlawed.

CBD and the Opioid Epidemic 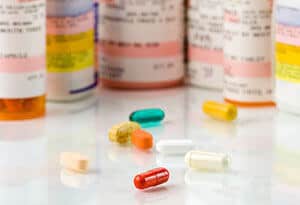 Cannabis may cause far fewer side-effects than opioid painkillers. This is a big deal. The dark side of these drugs is no secret. If cannabis, CBD, or CBD and THC combinations can reduce the severity of the current opioid epidemic, that would be welcome news to many.

Human physiology includes a system that seems specifically designed to bind with cannabinoids. Our bodies produce “endocannabinoids” that interact with the same specific receptors as exogenous cannabinoids. This endocannabinoid system (ECS) plays a role in the way our bodies generate sensations of pain.

Studies on CBD and Migraines 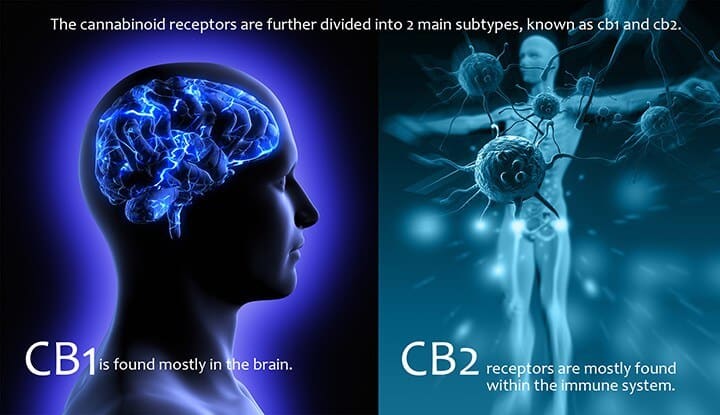 A 2008 Italian study showed a direct correlation between chronic migraine sufferers and ECS functionality. It found that these patients’ ECS systems were operating at around half of the functionality of people in overall good health.

More studies on it

A study of 2016 about the use of medical marijuana for migraines found that 40 percent of the 48 individuals who were surveyed reported fewer migraines. This study was published in Pharmacotherapy was the biggest complaint against marijuana was drowsiness. Another complaint was how some of the surveyors did not get the proper dose.

In the most recent study of CBD usage and its effect, a study was published in Cannabis and Cannabinoid Research. This one happened in 2017 and it explored the effects of oral cannabis. During the course of 6 months study, 26 individuals who were suffering from medication over-usage headaches took oral cannabis with Nabilone or just ibuprofen.

Serotonin is a powerful neurotransmitter that originates in the human body. It drives mood, appetite, libido, sleep, memory, and more. Migraine headaches have been linked to a serotonin deficiency. 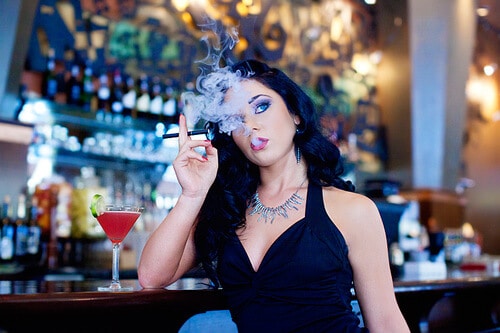 People ingest or take in CBD oil in all kinds of forms. There is truly something for everyone.

Inhalation is a rapid delivery method that gets the medicine into the bloodstream almost instantaneously. Vaporizing is growing in popularity because of the gentleness on the throat and lungs. This is especially true when you contrast vaporizing with smoking. In fact, even cigarette smokers are changing their lives through the introduction of CBD. But that’s a story for another time.

Inhalers, such as those we’re familiar with for treating asthma attacks, are also quickly gaining in popularity. It has a much more medicinal feel. These also have a low level of latency, and they also effectively meter the dosage for extreme control and finding the sweet spot. It is great for those who want to exercise close control over their CBD dosing.

This may be especially appealing for patients whose dosage includes THC. These are people who may want to minimize the psychoactive effects to the largest possible extent.

Where does CBD oil go from here?

It seems that medical cannabis is here to stay. Those who have seen the power of CBD or it’s potential remain vigilant. The goal is to ensure that access to this powerful healing medicine is not compromisable by ulterior money interests in the pharmaceutical sector.

You maybe are dissuading yourself from using an alternative form of medicine that could be helpful for you. You may at least try if it is compatible with you, because if it is (it probably will be), you may be able to gain a good number of benefits from it

Increasingly, in the United States and around the globe, communities comprised of neighbors, family, and co-workers are embracing cannabis and CBD oil. Society is beginning to see innocent old CBD as a valid, effective treatment for an ever-increasing number of ailments. Even some of the doctors unofficially or officially prescribe CBD as a medicine for treating different ailments including migraines.

It doesn’t matter if you’re not into the marijuana scene and don’t want to associate with the practice of getting high. The CBD community is full of people just like you! CBD provides a safer, more natural remedy that appeals to people from all walks of life. CBD is a non-potent form of cannabis and is very different from marijuana. This is why CBD will not get you high if you may think that if it does. 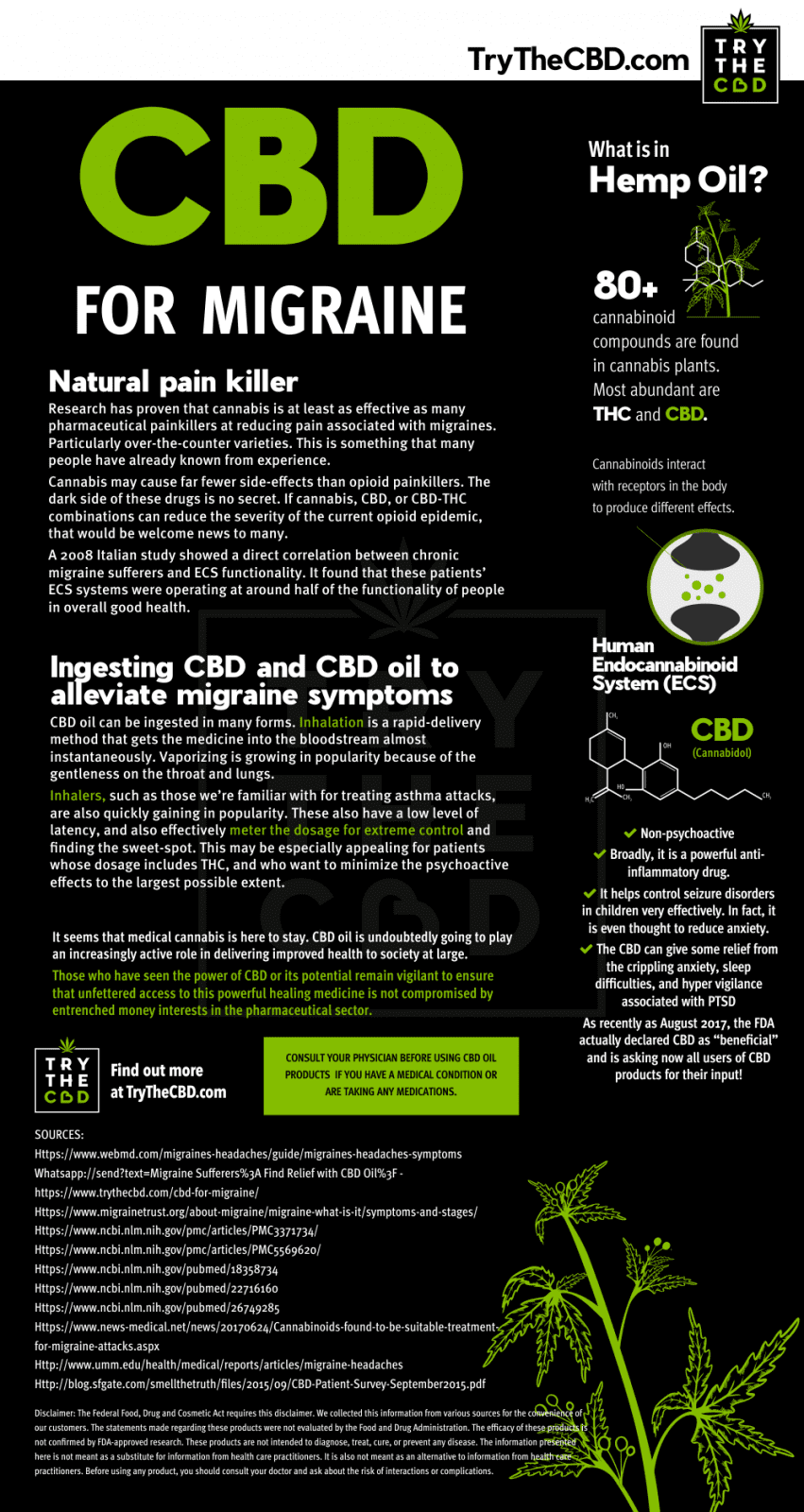 Ready to Try CBD for Yourself?

Everyone deserves to be healthy and comfortable in their bodies. We ought to investigate these advantages fully with a view to bringing this potent healing agent into the lives of everyone that might benefit.

If you’re ready to try CBD for yourself, feel free to browse our wide selection of CBD products. We sell CBD in a variety of forms to appeal to even the pickiest consumers. You are sure to find something that catches your eye.

As you may have read in the information above, that CBD us consumable through many different ways. We will also like to inform you that all of the methods prescribed are non-evasive and do not incite complications in the user. We hope that you have found our article on CBD for Migraines educational and informative!